skip to main | skip to sidebar

I thought I’d show you a before and after that I did about 4 years ago. My living room was stuck in the country look from the early 90’s. I think it was actually 1990 when we bought this sofa set in all of its blue and white checked country-ness. The walls were a carefully chosen boring creamy white and there was lots of blue and mauve throughout the room.

My 1st introduction to the online world was through the bulletin boards on AOL. We had been members practically since its inception and as things developed I found their home decorating boards as well as some wonderful gardening boards and boards for collectors. Way back then there was a poster who I knew little about but loved to read his posts. At one point in time He even posted about painting his couch. Hmmmm I filed that little tidbit away in my head. As time went on those boards on AOL went through their own ups and downs and people came and went.. I hadn’t seen anything from that poster for a while and had moved away from following that board even before its demise because of some of the peoples attitudes. Then I discovered the message boards on HGTV.COM and soon noticed the same unusual name posting there. You couldn’t mistake a name like Magnaverde.

While I followed that board religiously Magnaverde posted there about how in a pinch when expecting company he had painted a couch with great bones but whose print the could no longer stand, Some of the other people who followed that board decided to follow in his steps and I watched as 1 poster painted a chaise lounge and another painted 2 wing back chairs. The poster with the wing back chairs took pics and documented her progress as she tried to religiously follow Magnaverdes process for painting his upholstered furniture.


Fast forward to 4 years ago … I was sick and tired of the country décor in my L shaped living room /dining room combo area.. The biggest factor in my burning desire to do something different was the newest piece of furniture that resided in my LR. Hubby had bought me a baby grand piano as an anniversary gift a year earlier and the classic old lines of it simply didn‘t feel right with my old décor. I had the shadow of of an idea of what I wanted but nothing definite.

I started putting together a file of pics and ideas that I liked for the room. In the midst of this I found House fabric online and one day noticed that their brick and mortar store was just a few miles from where I worked. The people there were wonderful and through looking at all their wonderful fabrics I came up with a plan for my living room and dining room. They even gave me the phone number for someone who could make me custom slipcovers for my furniture. Woohoo!! I was on a roll.

After numerous phone conversations with the lady who was to do my slipcovers I bought the fabric and we had a date scheduled for her to come out and measure and pick up the fabric. Then a few things happened. The 1st was that she had a family emergency and needed to reschedule, but "could I call her back in about a month?" As disappointed as I was with all that, I understood that things out of our control happen. Then … the 2cnd thing happened. My cell phone died. Yep … deader than a doornail and … one of the phone numbers that was only stored on it that was lost forever, was the slip cover lady’s number.

Soooo I went back to House fabric … but it turns out that as a company they don’t give out phone numbers and that it was one employees decision to give me that number and the final kicker …. That employee no longer worked there.

(the great slipcover that never happened fabric)
Once again I was back out in the stores looking at living room furniture … so much of it is so oversized … and doing research and making calls trying to find another seamstress to make me slipcovers, I came across a post on the HGTV bulletin board that referred to Magnaverde’s painted upholstery technique. I decided that it was time for me to consider this as an option. I figured that the next hurdle was telling hubby what I wanted to do. He actually agreed to it!!! And so the experience began.

I took the loveseat from this set.

(the loveseat I kept, the couch I gave away)

(the before of my wingchair, notice I'd started pulling down the wallpaper in on the dining room side. There's nothiing like running with multiple projects started all at once )


And an ottoman that had matched another chair that didn’t live a long life.

I cut the skirt off of the loveseat and started painting …

The basic technique as I did it.
I guess that you get the idea that this went on for a few coats. I think I used about 5 coats of paint letting each cure for a minimum of 24 hours before applying the next and then sanding well.   Once all the coats of paint were in place. I once again got into hubby’s power tools and borrowed the machine that he waxes the car with. I applied a coat of Johnsons paste wax and used the power tools to buff it. I picked up some trim at Hobby Lobby and hot glued it onto the love seat to cover where I had removed the skirt. Then gave everything a nice little pat down with talcum powder.

The above pic shows the trim glued to the love seat. Everyone that sees my furniture thinks it is cream colored leather. Since I'm notorious for starting multiple projects ... and I was anxious to get my new piano into the room. During the 24 hour cure time between layers of paint on my furniture Hubby and I removed the baseboard and painted the living room and dining room. I painted the baseboards and new crown molding and he installed it. We made our own curtain rods using small iron plant hanger brackets and black iron pipe cut to length.

The above pic shows those details and the window treatment that I had in place until my panels were ready. I also painted a few other things around the house with the same wall paint that I used on the couch, wingchair, and ottoman.I started with the lamps. One was gold left over from an old set that used to be in our bedroom and the other I purchased on clearance at Walmart for $3. It was green, but I figured what did I have to lose if painting it didn't work. You see what was the gold lamp in the picture that showed the braid trim on the loveseat. The corbels were gold and I painted them cream, but wasn't happy with that so I dry brushed on a little bit of gold craft paint.

Another shot of the wingbackchair

And a straight on shot of the loveseat and ottoman.

Here is a link to the blog of someone else who has tried this. Mary Ruth has her own pics and comments. She includes an in depth quote from Magnaverde detailing how he completed his sofa. The last pic I want to show you today is the piano that made me actually make the changes that I'd been planning.

I'll show you more pics of the room another day. The way it ended up was just what I wanted ... at that time. But you know how we can be with changes in our home ....
Posted by Jeanne at 10:38 PM

Labels: before and after, living room, painted furniture 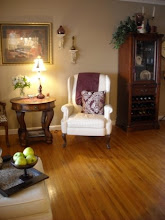 Jeanne
Midwest, United States
I'm an empty nester that works full time as a florist and never has enough time to do all the fun creative stuff around the house that I want to do on my days off from work. I have three ornrty maltese at home and a hubby who even though he works an office job has never known how to just work 9-5 so our schedules are always erratic.